Ive been installing Lustrolite for a couple of years now and it was always the only product of it kind, but now they have competition!

Wetwall, who are well known for there MDF based wall boards, launched their own range of high gloss glass effect acrylic boards last year called Wetwall Acrylic which I have used a couple of times when stock of Lustrolite has been unavailable. Wetwall also have a larger range of colours available.

But now there is a new kid on the block!

Multipanel by Grant Westfield are a big name in the bathroom wall panel industry with their range of boards including MultiPanel, PolyPanel, TilePanel, DigitalPanel, SoundPanel, CleanPanel and flooring in the form of TwinFloor Click and Stick and now they have their own range of Glass Effect acrylic board called Reflect.

“Multipanel Reflect Range with a crystal clear acrylic front and solid coloured acrylic at the back, these panels create stunning depth that gives the illusion of glass. Choose from our range of colours that best complement your interiors to create a unique and modern twist in your shower enclosure. These 4mm thick panels have a hard-wearing finish and are easily cut and fitted to add a sense of luxury to any bathroom”

Lustrolite have launched a new colour, Safari, in the UK.

Lustrolite Safari wall panels are available to buy in the UK as of January 2015 and can be purchased/preordered now online.

Lustrolite is a replacement to tiles and looks like back painted glass. With a special hard coated top layer for extra scratch and chemical resistance, cleaning and maintaining your panels is nearly effortless.

The bathroom in a home was considered to be the area where persons tend to offer much less significance while constructing. However, nowadays the people give lots of attention to the bathroom building and designing. But still several of persons missed out the ventilation while designing the bathroom. Generally the bathrooms in the home are very humid or damp and air of the bathroom tends to have more moisture. And thus more moisture can result rotting of the ceiling and walls and this can cause the few structural damage as well. The bad thing about the moist surroundings is that these promote the growth of the bacteria, molds, mildew and several of other microorganisms.

To overcome this problem, you must install the Xpelairbathroom fan in your bathroom. These fans are really very effective and at the same time very attractive. These bathroom fans are manufactured to eliminate the bathroom odors and decrease the quantity of the moisture. It might pull this out of the air as you’re taking a bath so that the mold is not capable to develop or grow at all.

The bathroom has to be appropriately ventilated. Few bathrooms have the standard ceiling fans fixed in them; however they don’t perform the needed job of eradicating the moisture and the dampness from a bathroom. The most excellent bathroom fans which can be fixed in the bathrooms are the extractor bathroom fans. These fans can remove bad smells, foul odors , eliminate moisture as well.

Lustrolite have recently launched a new colour in the UK market, forest green. 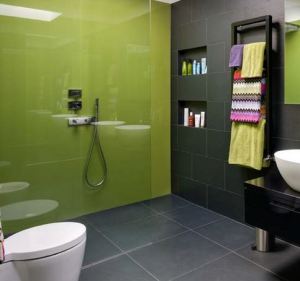 Lustrolite Forest Green wall panels are available to buy in the UK as of January 2015 and can be purchased/preordered now online.

Lustrolite is a replacement to tiles and looks like back painted glass. With a special hard coated top layer for extra scratch and chemical resistance, cleaning and maintaining your panels is nearly effortless.

High gloss wall panels in bathrooms have become very popular over the last year with the introduction on Lustrolite and BNQs own version Vistelle. Over the last 6 months i have installed severial bathrooms (normally within a shower enclosure) with Lustrolite, and i have to say the over all look is amazing.

The most popular colour by far seems to be the Glacier, so much so that Lustrolite and Vistelle have become out of stock of the larger 1200 x 2440 size boards. Fortunately I have been able to source an alternative product that is almost identical to Lustrolite of Vistelle called WetWall Acrylic made by the company who pioneered shower and bathroom wall boards…. WETWALL.

These board appear to have to same construction, can be cut in the same way and installed in the same manner. The only down side to the WetWall Acrylic is that there are no colour matched trims avaiable, but you can still use the Lustrolite trims.

So if you are looking for Lustrolite Glacier boards, then why not take a look at WetWall Acrylic Green Mist.

What is the difference between an Electrical Shower and a power shower?

This is a question I often get asked…

1) An electric shower heats cold mains water as it passes by a heating element, similar to a kettle. They are connected to a mains water supply and an electrical supply. Electric showers are perfect for home without a gas supply or homes with stored/tanked water supply. You can also use these in home with a combi boiler as no hot supply is required.

2) A power shower is a pumped shower which will boost the water pressure if the water pressure is not high enough for a good flow from the shower head. It connects to CISTERN FED hot and cold supplies and can be thermostatically controlled. It delivers the mixed water at a good pressure to a shower head. Power shower require a hot and cold water feed and should not be fitted to a combi boiler system.

I hope this helps people.

When im fitting a bathrooms, either with a shower or a bath or even a shower bath I always fit a AquaStrap to guarantee the installation.

AquaStrap is a leading up-stand seal used for sealing a shower tray/pan or bath tub. For those people installing a new shower tray or bath who prefer an exposed silicone joint to an extruded profile, AquaStrap will remain watertight in the event of the silicone seal leaking through joint movement or natural deterioration.

As said I always use a Aquastrap to seal in both shower trays and baths.

Aquastraps are available from most places as well as Aquastrap for sale online.

The below video by about.com is a great watch and full of item and inspiration for designing a bathroom in a small space.

This video gives bath design in planning you bathroom and colours to use in a small bathroom and accessories to use to make the most our of the space in your small space bathroom.

Frontline Bathrooms offer a FREE bathroom Designer. http://www.frontlinebathrooms-3d.co.uk/ This is how to use their free bathroom designer

Are you thinking of changing your bathroom? Don’t know where to beguine?

If your thinking of getting a new bathroom there are two ways you can go, you can either visit a bathrooms showroom and hire them to design and install your bathroom from start to finish, or you can DIY  it.

These two main way each have there plus and minuses. The plus to going to a showroom is that you can get the job done in one place from start to finish with very little time or hastle for your self. You bathroom will also be backed with a guarantee if anything were to go wrong…. or leak. The minus to this is, this may be costly depending on the company you are dealing with. This cost is down to the time and effort the staff and team at the showroom put into your project.

The the other way is the DIY route. This can be less expensive than using a company/showroom to do your bathroom, however you will have to do allot of the leg work your self including buying the equipments, supplies, tiles, floor, bathroom suit, accessories etc etc etc before then removing your old bathroom, prepping the room, then fitting the new suite and installing the fixtures and fitting. You may also need to purchase a skip or van to remove the old suit and rubbish from your home. You also have no guarantees with your fitting and any leaks and damage caused may not be cover by your home insurance (unless you are a qualified plumber). So you may want to consider this when deciding to go full DIY.

There is a third option when it come to bathroom installing and design…. You can do a mix of the two types. You can visit the showrooms and get inspiration then purchase the equipment your self either from a online bathroom retailer  then design the bathroom your self using a program like the free frontline bathroom designer  then have a qualified plumber come and install the bathroom for you. This way can also be more time consuming with searching for products, designing your room your self then finding a qualified fitted who gives you a good quote and is experienced and reliable. But the financial saving can be great.